Our Farm was originally a Dairy Farm until 1978 when we made the change to producing home grown Vegetables. We have always had a few cows on the farm which we have grown on and fattened for market. In November 2011 we decided to invest in a few Pedigree Hereford Cattle which we would breed from to increase the herd and produce Beef in the future. We initially purchased five cows which were pregnant and two female calves or heifers. In April 2012 all five cows calved successfully and gave birth to four females or heifers and one male or bull calf. In July 2012 we hired in a Pedigree Hereford Bull who spent about two months with our herd of cows. The result of his visit was six of our cows becoming pregnant and our first calf Daisy was born in April 2013, another heifer so we are very happy! 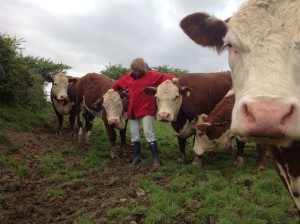 Who are you looking at?

It may surprise you to know but all our cows have their own Passports, this is in line with Government Regulations so that each cow can be traced if they are ever sold or moved. As they are Pedigree Herefords we register each new calf with the Pedigree Hereford Society as proof that they are pure Pedigree Hereford. Just like our chickens our cows are extremely pampered and enjoy our company. Every weekend Steve and Miriam spend as much time as possible with them.

We firmly believe in giving all of our animals the best possible care and attention. We feel that this produces happy and healthy animals that are content. Especially with our cows we have found that it also makes them so much easier to control. If we need to move the cows from one field to another for example, Steve simply opens the gate and shouts ’ Come on girls ‘’ and they all come running……far better than chasing them!

Although we have no control over it we much prefer for our cows to have female or heifer calves. A heifer is a future mother so we can breed from her and therefore increase and strengthen our herd. If we do get a bull calf then he will be doctored or ringed so he cannot breed. He will stay on the farm until he has achieved a suitable size to sell for beef. This is the way it is in farming but we do everything in our power to ensure that our lovely Hereford Cows have as happy a life on our farm as it possible to give them.

Peggy working hard with our cows 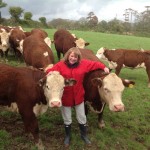 Taking their turn for a good brushing 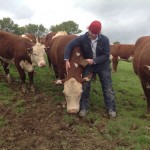 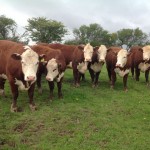 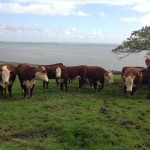 Steve our pedigree Herefords what a view 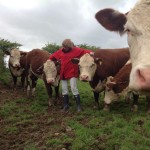 Who are you looking at?

We offer a free local delivery service. Please feel free to enquire by phone email or just pop down to our stall for all enquiries.